La Haine is a French, black and white film directed and written by Mathieu Kassovitz. It was produced by Christophe Rossingnon in 1995 with Canel plus. The most recent film Kassovitz has gone on to direct is Rebellion in 2011 which is about dissidents in a French colony who attack a police station and take hostages. There are immediately similarities between this and La Haine regarding police and crime. Starring Vincent Cassel (Vinz), Hubert Kounde (Hubert), Said Taghmaoui (Said) and Abdel Ahmed Ghili (Abdel), La Haine follows Vinz, Hubert and Said through their twenty four hour period spent in the French suburban ghetto after their friend, Abdel is beaten unconscious by police. This causes riots in which a policeman loses his gun which is then found by Vinz who threatens to kill a member of the police if Abdel dies in hospital. It is a gripping crime, drama film which had a budget of 2.3 million Euros and then went on to make $309,811 in the box office. This is a fairly low budget, therefore suggesting that La Haine is an independent film. It does follow some of the conventions of independent films by having lots of dialogue, limited special effects, actors who may not necessarily be well known and a specific choice of music.

La Haine was made in 1995 and the context of France at this time links to the film as a whole. There was a clear separation between upper, middle and lower class people and this is made apparent in La Haine because the lower class people from the estate, surrounded by poverty are juxtaposed with the upper/middle class people in Paris due to their mannerisms, locations and clothing etc. A scene which clearly highlights this is the one that takes place at a late night exhibition in an art gallery. Inside is filled with well dressed, upper/middle class citizens, making the protagonists stand out and look out of place and I believe this was a very significant scene because it is when the class divide becomes most noticeable to the audience. There were more than 30000 car thefts per year (there is a car theft scene in La Haine) and 1.4 percent of the population were victims of assault (one of the main narrative strands is the fact that Abdel was brutally attacked by police).  During the 1970’s, there was an economic crisis and during this, immigration was limited by the French government and many other European countries constantly blamed unemployment on immigrants (this helps to explain the racism in La Haine). It clearly follows the genres of drama and crime because it is very realistic and Kassovitz definitely does not shy away from the truth, resulting in a gritty narrative which reveals the brutalities of the French society in the time it was set. Crime is constantly developing the narrative, pushing the characters into new situations and challenging them and their abilities, strengths and morals. 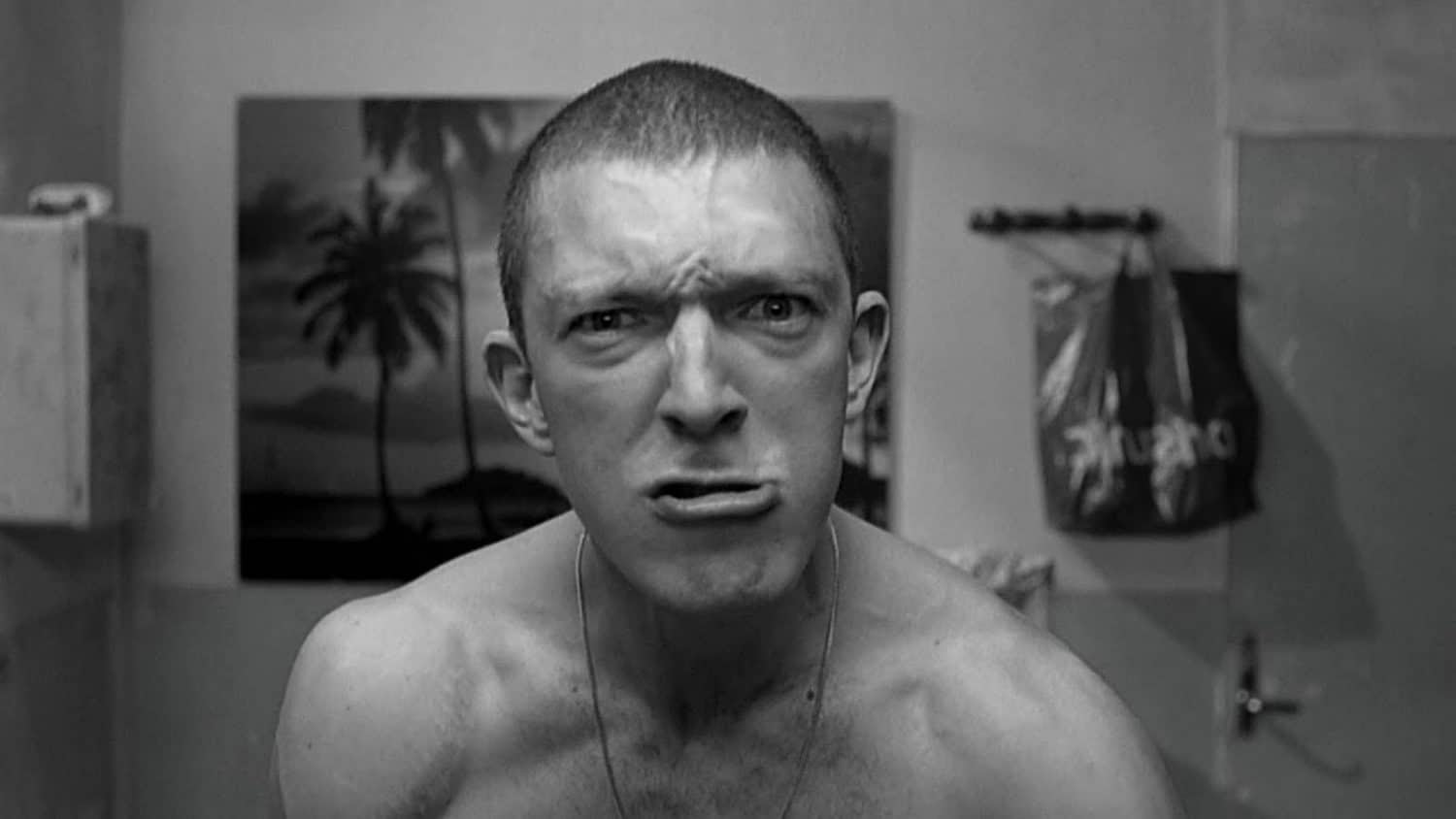 I felt the narrative structure of La Haine was very powerful, especially how the beginning and end was linked through the quote: “It's about a society on its way down. And as it falls, it keeps telling itself: "So far so good... So far so good... So far so good." It's not how you fall that matters. It's how you land.” I really liked how in the final quote, the word ‘man’ was replaced with ‘society’ because it reveals one of the overall messages of the film which is that France as a society was falling and crumbling down due to the crime within it and possibly, it was oblivious to its damage (“so far so good”) so kept its focus on a new equilibrium (“it’s how you land”). The film title, La Haine translates to ‘hate’, illustrating that hate is the force that is destructing society and tearing it apart and this theme is reinforced again and again throughout the film to emphasise the negative impact it had on France.  The narrative is restricted to a twenty four hour period and the audience are constantly given reminders as to how much time the three men had left and I believe that this manipulation of time was very symbolic. Firstly, it creates an extreme amount of tension because there is a sense of pressure, especially as Vinz has vowed to kill a cop if Abdel dies, so the audience are expecting something dramatic to happen at any moment which leads to a build-up in suspense. Secondly, it links to the quote spoken at the beginning and end because as the clock is ticking down, the plot of the film is still ‘falling’ and we are waiting for that much anticipated ‘landing’. As the time becomes less and less, we are getting closer to the ground which again, creates tension and it is an accurate representation of the pressure of time.

The narrative structure of La Haine almost breaks the rules of Todorov’s theory due to the numerous disruptions throughout which may have been purposely used to reflect how the main characters are always surrounded by crime and wherever they go, they cannot escape from it- just like the narrative cannot escape from its disruptions. These disruptions help with the build-up of suspense and I believe they foreshadow the climatic ending which also reveals messages such as karma because there are consequences to the actions of the men. Within the narrative, there is a binary opposite between the police officers and the criminals who clearly have different intentions. The police officers are negatively represented to be scandalous because they are very brutal towards the youths and criminals and they treat them as if they are animals. The criminals on the other hand may be portrayed as violent, but they are also shown to have better intentions as they are fighting for justice. However, I do not believe this to necessarily be an anti-police film because it realistically follows the context of what France was actually like regarding police brutality so the audience are given a true insight into what life was like during that period of time.

There were a variety of key scenes in La Haine which had a large amount of significance. For example, there is a scene towards the end of the film in which the three protagonists have cornered a skinhead (played by Kassovitz) and Vinz has a gun pointed at his head whilst Hubert is trying to convince him to shoot. There is a build-up of tension but eventually, Vinz cannot kill him and lets the skinhead free. This illustrates that he is not the fearless and heartless gangster he pretends to be and deep down, has a good, true nature which further indicates his insecurities and it challenges his masculinity because he is seen as weak after not murdering the skinhead. The fact that Vinz owns a gun throughout the film is very symbolic because the gun itself represents Vinz in the sense that he is a ‘ticking time bomb’ whose anger and aggression can be triggered by just one small action (the trigger of a gun) to which it then explodes into violence.

The representation of women in La Haine follows the domestic housewife stereotype because when we are introduced to the men’s families, they are all female but we only see them inside their flats. There are males everywhere in the banlieue- the protagonists, police, criminals and youths are all male and this represents men as having more strength, superiority and power whereas women are represented as only having authority inside the home, where they have to look after it. There is clearly a very negative representation of youth throughout as they are portrayed to be violent, aggressive and disrespectful which is shown through iconography such as guns, drugs and cigarettes and also through mannerisms such as swearing, shouting, gang fighting and theft. This could construct a false idea to the audience that all youths behave in this way when in fact, they were represented this way due to the location they were in (the estate) because the scenes that took place in Paris were not so rough and gang related. However, I believe the police in the film have a much more negative representation than the youths due to their unnecessary behaviour in scenes such as the rooftop scene, the hospital scene and of course, the end scene where they get carried away with using their weapons and ‘power’ to their advantage. 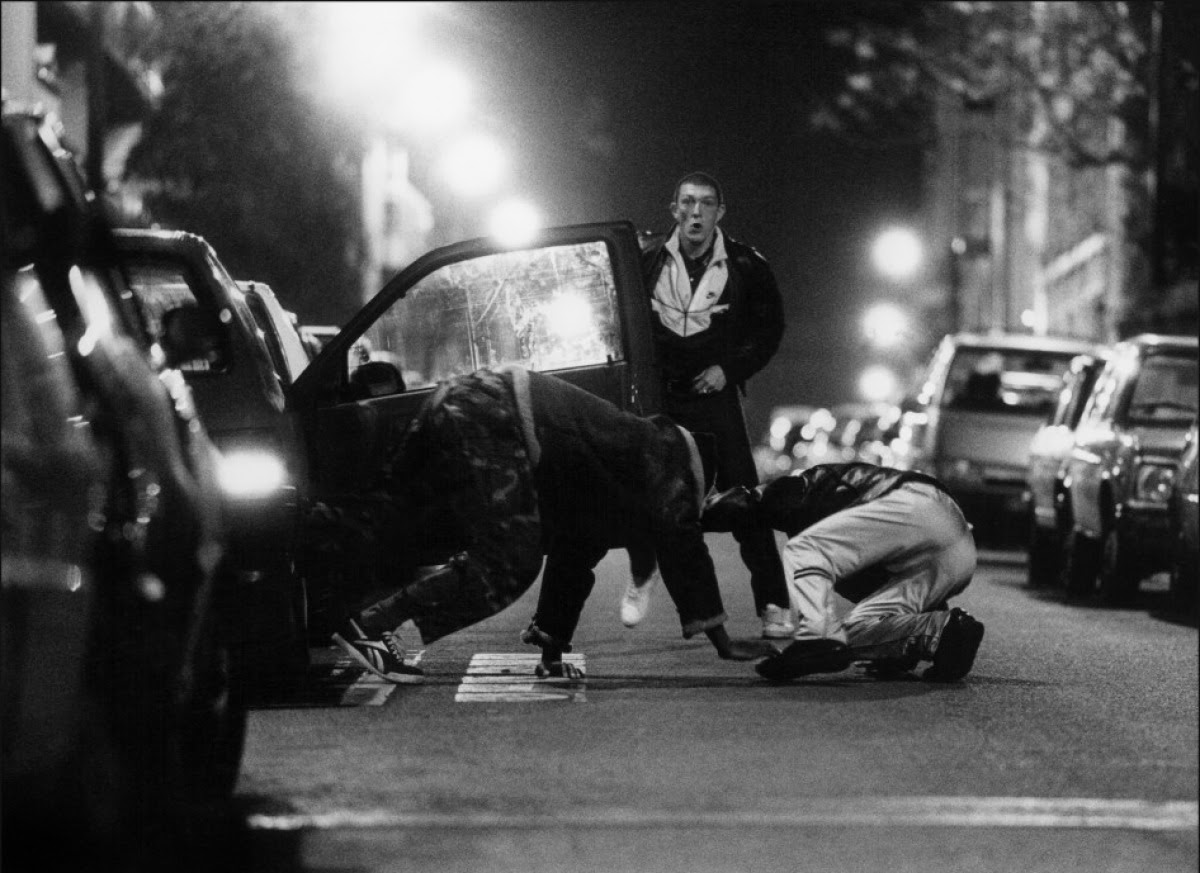 In conclusion, I really liked La Haine and I would rate it 9 out of 10. I thought the unfolding of the narrative was very effective and I was gripped throughout due to the director’s strong use of tension. The character development was exceptionally good and I learnt a lot more about each of the main characters as the film went on which meant I became more emotionally attached to them and I could understand why they may act to situations in certain ways. What stood out to me most was the visually stunning cinematography, especially the use of depth of field which ensured full focus was on a particular character or prop. The beautiful shots of France were juxtaposed with the actual plot which shone a negative light on its society and the fact it was in black and white helped to add to the serious tone of the film and it enhanced the realism of it. Black and white may also have been used to steer the audience away from the stunning scenery of France and guide them to focus more on the characters and the negativity that is surrounding them and the area. It enhances the fact the film is based in a working class estate, giving it a bleak appearance and making it clear that the protagonists are living in poverty so by using full colour, the audience may have been distracted from these points.
Posted by Unknown at 16:45